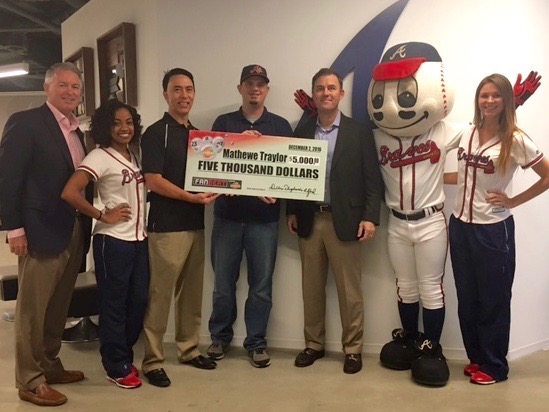 “Now being presented with the $5,000 check from Georgia Lottery as the 2016 season grand prize winner for Braves FanBeat — Mathewe Traylor!”

It would’ve been fun to have Traylor announced over the P.A. system by announcer Casey Motter on Braves Vision just like a Braves player when he strolls to the batter’s box. However, given that SunTrust Park is still under construction, that wasn’t quite possible last Friday, Dec. 2.

Since opening day of the new ballpark is still a few months away, Traylor was presented with a big check at the SunTrust Park Preview Center, by Braves FanBeat sponsor Georgia Lottery. Pictured above is Traylor (center), John Crow (on the left), a host for Georgia Lottery, and Ed Trimble (on the right), our CEO and founder of FanBeat.

Traylor, a diehard Braves fan who lives in Kennesaw, was the grand prize winner, but there were plenty of other Braves FanBeat season prize winners, announced last month on our blog. These winners got to take home autographed jerseys, win a chance to meet their favorite players at Braves FanFest in 2017 and even win a trip to spring training in Orlando this spring.

Traylor said that Braves FanBeat is unique because it creates more active and engaged fans. It’s a game within the game that allows fans to feel like they’re part of the action.

“FanBeat was able to create a level of engagement I rarely have had during a regular season of baseball,” Traylor said. “Every day was like a playoff atmosphere because I was competing against other fans to win prizes, all while cheering on my favorite team. The most rewarding part was getting to meet, and interact with, other FanBeat players.”

The presentation of Traylor’s check officially puts a cap on the 2016 Braves FanBeat season. Looking ahead to next year, given the Braves’ flurry of offseason activity, there will plenty of new faces on the field at SunTrust Park, as well as plenty more exciting young prospects making up arguably the most talented minor league system in baseball.

All of these story lines will again be reflected in the first real-time, predictive gaming app for Major League Baseball. Needless to say, we can’t wait to roll FanBeat out for 2017, offering prizes to more fans during what will be an historic – not to mention exciting – season at SunTrust Park.