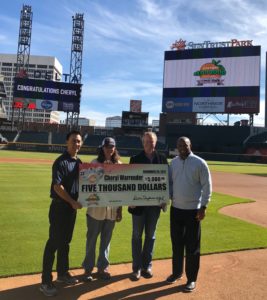 In baseball, when the game’s over, they say, “The Braves have recorded the final out.”

Here at FanBeat, we’ve sent the final question for the 2017 season.

Earlier this fall, we wrapped up the second season of Braves FanBeat, sponsored by the Georgia Lottery and integrated into the MLB Ballpark app. Fans answered questions in real-time during each half inning of Braves home games to compete for a great line-up of prizes – like autographed balls, scratchers from the Georgia Lottery, live batting practice experiences with Braves players, a trip to spring training in 2018 and even a $5,000 cash prize from Georgia Lottery. (Congrats to this year’s winner Cheryl Warrender, who was the grand prize winner this year and had the check presented to her on the field at SunTrust Park).

Our newest prize was added mid-season with the introduction of the Georgia Lottery $1 Million Challenge. During every game, any user that answered all 28 questions correctly would win $1 million. While there were no winners this season, throughout the year a couple players came within a handful of correct answers of winning $1 million.

For the second straight year, FanBeat helped increase engagement for every Braves fan watching the game. Users love the opportunity to predict in real-time how the action will unfold on the field, while also testing their knowledge of their favorite team against other fans. Users who try the game love it and keep playing all season. The average user answered 60 percent of the total questions asked every night. In fact, for all of 2017, 51 percent of all users played the entire game, answering over 2/3 of the questions.

FanBeat’s value as an engagement tool is reflected not only in the numbers, but in the feedback from users. At the end of the season, Matt Traylor tweeted to FanBeat’s Twitter account, “Thanks for giving us baseball nerds an outlet to compete and make new friends, all while cheering on our favorite team.”

We are already looking forward to Opening Day 2018.

A new US Gaming Category Emerges